For years now I’ve been hearing how the best possible professional development for a senior school teacher is involvement in assessing the end of year exams with the State’s education authority. However, year after year, I’ve also heard those colleagues of mine who do it groan about the extra workload it entails. So, while I often thought about it, I had never signed up for the gig. In any case, the end of year is always busy for a Year Level Coordinator so I would tell myself that I didn’t have the time.

But this year was different. This year I was mad.

Basically, the marks my students were awarded last year were below expectations (theirs and mine). True, we could possibly be excused for not fully appreciating the demands of the course as this was the first time we had taught ‘English Language’ (a socio-linguisticy kind of English subject) at year 12. It was also the first year of a new study design and there was uncertainty everywhere around what the end of year exam would look like. But I’m not playing those cards. We thought we had prepared properly. After the exam all the students left saying they were happy with it and not surprised by anything in it. Yet our results were mediocre.

It was intensely irritating.

For the record, all the students I taught last year ended up where they wanted to go and were not disadvantaged by the scores they were awarded. Their disappointment was, therefore, short lived. I, on the other hand, was not prepared to take this injustice lying down. I questioned it at the highest levels I could find which was, predictably, utterly pointless. Next, I attended the public ‘meet the assessors’ night and heard their observations of how the exam was handled by students across the State. That was helpful but nothing really stood out there either.

In the end there was nothing for it. I applied to be an assessor. To hell with the inconvenience. I had to know.

Before I continue I should point out that I am legally obliged to avoid discussing much of this experience on social media. As I’m keen to avoid a Special Ops team descending through my ceiling and confiscating my laptop, I intend to honour this commitment. All I wish to do here is reflect on the experience in general and not the specifics of the exam assessment.

My first reflection is that the people who do this work are impressive. What’s more they’re passionate, and thorough people. They work towards a consensus on what constitutes a mark and if that involves robust discussion at the first meeting so be it. They do not (as is sometimes assumed) rush through papers and while there are some that whine and opine about the quality of the responses they must read, they do so only because they care and are looking for reasons to add marks – not take them away.

My second reflection is that the process is undeniably accurate. Anyone who has corrected essays will know how big a part professional judgement plays in correcting extended written responses. Well, there are processes and controls that ensure every script is looked at properly and by more than one assessor.

My third reflection is that everything I do in this subject now comes with gravitas. I’ve already had one week of working with next year’s class and while there’s nothing remarkably different in my teaching, everything I say is said with a conviction that only comes with being an experienced assessor. Not that I am experienced yet, I need another year or two before I can genuinely claim that. Nevertheless, I know what I’m talking about far better than before and my students seem to be reacting to that.

My final reflection is that we did nothing wrong last year, we just didn’t do it well enough. That’s why the results were mediocre. If a student is going to achieve marks that are better than average they have to earn them and justify that status. This isn’t an IQ test, it’s a meritocracy based on demonstrated levels of expertise.

I always knew that but now I get it.

So, basically, they were right. About everything. The quality of our work last year and the usefulness of the exercise. It is unquestionably the best PD I have ever done. It was inconvenient, the remuneration was measly, it was long and tiring, it challenged and questioned my processes, it forced me to do things properly and held me to a high standard.

I’d recommend it to anyone. 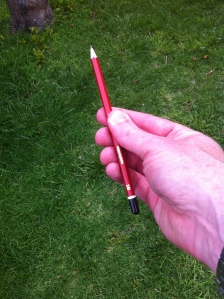