They say joy is in the giving but I have discovered over the years that there is also great joy to be found in the making of stuff for giving, and even some joyous moments in the bragging about making stuff for giving.

Each year, as the school commitments recede, I tend to look for extra curricular projects … probably because I’m an incurable glutton for punishment. Any such projects however must first be assessed according to a rigorous screening process where the effort involved must be justifiable. My Project Justification Criteria is as follows.

In truth, I haven’t always managed to completely satisfy the PJC but 2013 proved to be pretty successful so here’s a quick summary of this year’s X-mas experimentation.

We were given a fancy cookie extruder thingy last Christmas. It had lain dormant all year until I was asked (some would say challenged) to produce something for the staff luncheon. As you can see, the results were highly satisfactory. I think it should be noted though that the only real trick with this project was disciplining myself to follow the instructions properly. It should also be noted that I find that sort of thing particularly tricky.

All tied up in a bow

A dear friend and colleague of mine is moving to greener pastures and, knowing him reasonably well, I arranged to be his Kris Kringle (or Secret Santa) as I had this brilliant idea for a present. I thought I’d take some old school ties and turn them into proper bow ties. I mean, come on, how hard can it be? Right!?

It took five minutes on the internet to find my DIY guru (Miss P you are extraordinary) who would help me through the project. Conversely it took about five days to find some suitable school ties to deconstruct for the project. After that, there was about a 2-day turn around from unpicking to the finished product you see below. 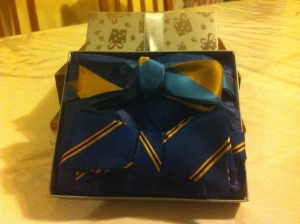 I want to pass on a big thankyou publicly yet moderately anonymously to RBR, who helped me source ties, and PCS, who sewed bravely under pressure.

I also want to say thankyou to whoever the dude is that demonstrates how to tie a real bow tie in this video. I don’t know what you do for a living, but if it’s not in education, your talents are being wasted. See what I mean at

While the Extraordinary Miss P can be found at

Oh, and for the record this was an insane idea. If I had a time machine, I’d go back and smack myself accross the head just as I’m thinking rhetorical questions in italics.

My life long companion and Editor-in-Chief had hinted some time ago at requiring a particular item that would serve as a way of keeping her favourite earrings neat and tidy. In true hunter-gatherer style, this Christmas I set forth on the quest for such an object only to find that they don’t really exist. Actually, some things that approximate exist but all of them lacked an appropriate colour scheme and all of them were ridiculously (and I mean literally worthy of ridicule here) expensive.

So I’ve built her one.

Hopefully, you will have noted the “elegant” corner on the wrapping which (if I’m lucky) distracts the eye away from my laughably inexpert ribbon and bow. If you too would like to know how to wrap a pressie like the best in the world you should check out this final link.

Right, there it is, thanks for reading this, the final post of the year and the gloatiest post of my career.

Once again, my sincere thanks in taking an interest in this blog in 2013. I wish you all a safe and joyous holiday and may 2014 bring you all you need of life.