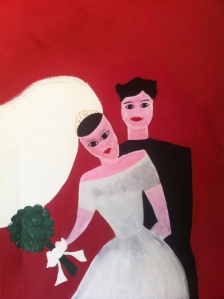 Last week J (my ‘Editor in Chief’) and I celebrated our 15th wedding anniversary. Hard to believe my luck that the girl I met mid 1997 saw potential in a scruffy beanpole with questionable dress sense, but it just goes to show she’s a woman of substance, patience, and has an eye for potential.

We married on January, 9th 1999 in an open air ceremony among friends and family. My memories of that day are of the emotions rather than the details. I remember it was a hot summer day but thankfully not the scorcher that had been forecast. I remember being very nervous about saying the vows we had written. I forget the vows. I remember lots of dancing. I remember relief, exhilaration, and exhaustion.

The wedding was fun. It was special and lively but it was one day 15 years ago now. While not much to that point in my life comes close to it, it was not what I would now consider to be the most important day of my life. As momentous as that day was, the days that followed it have held greater importance. So, in what may prove to be a fool-hardy move, I’d like to start this year’s posting activity with some thoughts on marriage.

The by-line of this blog is “What I’ve learned while teaching” and that is especially appropriate here as I’ve learned a great deal about life since that day and I’ve continued to teach all the while. Most importantly though, it’s what I’ve learned. I am not out to preach to the world secrets for a successful marriage because that would be pompous and judgemental (which admittedly, are characteristics I possess but promise to hold in check here). There are marriages that are happy, long, short, broken, fulfilling and dysfunctional. C’est la vie. What follows are a few observations I feel confident enough to publish despite very little authority on the topic. I’m just hoping 15 years gives me some credibility.

It starts with me …

Many years before I met J my dad, who was driving me to work, brought up the topic of marriage (he had a gift for bringing things up out of nowhere without it seeming odd). He suggested that a good age for considering marriage these (those) days would be somewhere north of 28 years old. I was incredulous. I retorted with “Dad! I don’t plan to get married until next century!” which made him chuckle. In time I came to understand that his point though had less to do with the maturity that comes with age than the maturity that comes with experience. By the time I met J, I had studied, graduated, worked, travelled, and dealt with demons and challenges (not the least of which was dad’s sickness and death from cancer). I had some understanding of how to function as an independent adult individual and how to cope with hardship. I still had a lot to learn – still do – but I’d made some headway on that and it made all the difference when I came to think of sharing my life with another.

For the record I had met and married J before the Y2K phenomenon had been proven anti-climactic. I think that would have made dad chuckle too.

Which is a concept and an approach to living that is easier said than done. But I’ve long since felt that very little in life that is worth doing is easy. When you think about the traditional vows, ‘In sickness and in health’, ‘For richer or for poorer’, ‘For better or for worse’, what strikes me is that there’s an all in quality to the promise and I personally can’t do that if I spend all my time thinking about me.

Half my time thinking about me seems to work for the present.

It’s about something bigger …

It was the opinion of the Ancient Greek play write Aristophanes that love helps people feel complete or whole. That’s an idea that has carried a lot of credibility over the centuries and like so much of the thinking of the ancient classics there’s a lot of undeniable truth to his idea. On reflection though, I disagree with the basic premise. The idea of completion has this implication of ‘job done’ about it that I don’t think fits the situation. I’ve come to believe that, in life, the job is never done. There is always more to do, changes to be made, room for growth. Individuals must embrace this journey for themselves and trust that, in love, they and their chosen partner will compliment each other.

Socrates thought Aristophanes was, Gods love him, barking up the wrong tree too so at least I’m in good company there.

That makes us human.

OK, so after all that, here’s something that is bigger than J and me. There’s a prevailing socio-political definition that considers marriage to be ‘the union of a man and a woman’. It’s a definition that I have noticed is questioned more and more. Personally, I’ve always found this to be so ridiculously superficial as to be mildly offensive. I could use the same definition to explain a mixed doubles tennis team. Marriage is many things; a journey shared, a conscious pairing of souls, a fusion of futures. All of which is publicly expressed through ceremony (sometimes religious, sometimes secular). That it has also always been a status shared between a man and a woman is a matter of historical fact but, as I live my life with J and the family we’ve been blessed with, I just can’t see heterosexuality as the most significant feature.