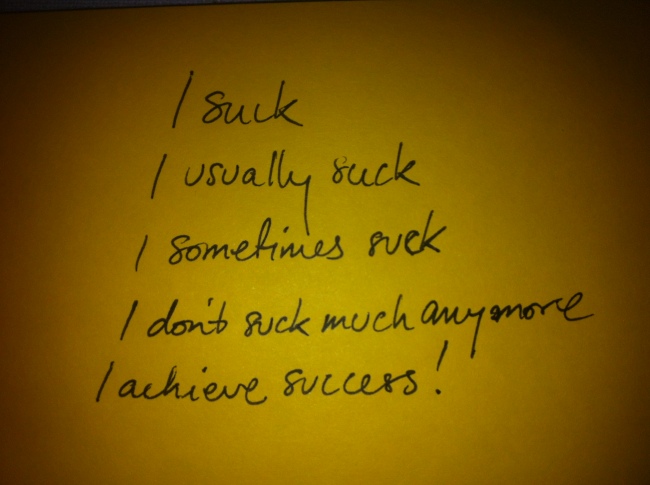 A three part post about a magazine, a meeting, and a musician’s musician.

I’m going to give you three fragments of my week. Each one triggered a memory of the other. Together they illustrate the point that, when people love something, they do it authentically, in their own time, and do not sweat the small stuff – like the finished product.

I dropped my little girl off at daycare this morning. I didn’t enjoy it. Twice a week for the last 18 months she’s been going and still, every so often, she will get distressed at my departure. Today was one such day and it felt like someone was ripping a band-aid off my soul. I know for a fact that she loves it there as she never wants me to take her away in the afternoon…but I digress. On my way out, to take my mind off the guilt of abandonment, I picked up a free copy of Melbourne’s Child: the best guide for parents.

I don’t know if the people who write in this mag are journalists, but their stuff is usually well written, and it’s always about education from a parental perspective, so I scan through it when I can. At lunchtime I had a chance to read it and found a piece about creativity.

The writer explained she has a wonderfully artistic child who does all sorts of stuff at home but hates her art classes at school. Rightly or otherwise, the teacher is cast as a villain in the piece. She is apparently, loud, controlling, and doesn’t like mess. The parent/writer offers to construct a carefully worded letter to the school but this is horrifying to the child, so instead, she takes her kids for a walk around the park. There they collect leaves and associated foliage, bring it home and make a 2 meter long collage. They then clean up.

It was one of those ‘I think there’s something in that for all of us’ pieces. So, the self appointed “best guide for parents in Melbourne” advocates active involvement in your child’s development. Involvement that is complimentary, if not actually in place of, their kids’ formal education. I’m not sure I completely endorse the portrayal of the school, but it’s her story. Anyway, it leads me to think of my Monday night meeting.

The staff have been working with an outside provider this year. She is a psychologist who specializes in students and educational issues. She’s pretty good in my estimation but I think the observations she leads us to are less than a revelation. For example, the conclusion of her thesis, after 2 hours of presentation, was that teaching children to be forgiving, kind, and generally loving will lead to them being resilient people in the future. Fancy that!

I don’t really want to criticize her though. A fascinating part of the session was the discussion regarding anxiety in students. I tend to agree with her premise that this is a serious problem and its one on the rise. It’s definitely a topic for a future post. What made it really fascinating though was how the staff reacted, quite spontaneously, to one aspect of the discussion on anxiety.

Having presented evidence that performance anxiety in junior and middle school students has a lot to do with the expectations they face in school, she asserted that perhaps there was a need to let children fail occasionally so that they could see it’s not the end of the world.

Well that, as they say, went down like the proverbial lead balloon. Actually, it sounded a bit like a deflating balloon too, as there were a lot of staff that made that almost whistle noise when you take a sharp intake of breath. Some murmmers played harmony with the whistles and created a general mood that warned ‘don’t go there girlfriend’. She moved on regardless and I suspect she didn’t understand what was driving the reaction.

What was driving it was the perception of staff, collectively, who are firmly of the view they are not given the license to allow students to fail. Failure looks bad. The school can’t accept the risk that failure may be misinterpreted. Neither can the education system that regulates the school for that matter.

I thought of all this when I considered the nasty art teacher in the magazine article, m/who is always yelling and worried about mess. The story suggested she had made a poor career choice. In my opinion (putting these two ideas together) she’s most likely preoccupied with having something tangible that she can show her superiors and the outside world more broadly. Something that the children can be given and achieve while operating in a restrictive timetable that gives only a short time frame before they then have to clean the room for the next class. Originality and creativity sacrificed so a teacher can demonstrate efficient presentation of curriculum.

…Musicians should go to a yard sale and buy an old f***ing drum set and get in their garage and just suck. And get their friends to come in and they’ll suck, too. And then they’ll f***ing start playing and they’ll have the best time they’ve ever had in their lives and then all of a sudden they’ll become Nirvana. Because that’s exactly what happened with Nirvana. Just a bunch of guys that had some sh***y old instruments and they got together and started playing some noisy-ass sh**, and they became the biggest band in the world. That can happen again! You don’t need a f***ing computer or the internet or The Voice or American Idol.”

Of course, Grohl is absolutely right. He wanted to be a musician and so he cobbled together equipment, played/practiced his heart out, improved, and the rest largely took care of itself. He even did it twice! Completely re-inventing himself from the Nirvana drummer into the Foo Fighter’s frontman. He didn’t need a school to structure a framework within which he could have his progression charted or passion assessed. His bio compliments the mum and kids who went out and collected leaves for a collage. His failures (and I’m sure there were many) were life lessons and not school ones. There’s no way Nirvana was coming out of a school music program and talent quest.

Mind you, the issue of anxiety still lingers. Kurt Cobane started the same way and was less successful at resilience than his good friend Dave.

So what should we make of this? Anything you like really, but for me, the theme of the post is personal creativity. Schools have come in for some criticism here but so be it. I don’t really want to make apologies for schools. I would ask though, that outsiders consider what pressure insiders are under to ‘perform’ before questioning their expertise or competency.

Oh, and one more thing. When I picked up my little girl, she had three paintings to bring home and told me all about the awesome day she’d had jumping in puddles.