This week I’m sharing a document that I worked on in collaboration with my senior English Language classes. We were discussing the ‘formality’ of the humble email. It quickly became apparant that this modern text type was far more formal in the mind of the digital immigrant in the room (yours truly) than it was for all the digital natives being taught by him.

As part of our study, I sent out a request to colleagues for examples of emails they had recieved from students. The response was incredible. I was inundated by examples from staff whose correspondance with students was, in their view, striking the wrong note. With these, my classes and I played around with the idea of student email etiquette. Here’s what we came up with.

p.s. All emails were sanitised (edited) by me to keep the register of the language but remove details of the individuals involved well before my students saw them.

Emails were invented and developed as a communication device for the workplace (and schools are workplaces). They are also a modern version of hand written paper memorandums and standard letters. These facts tend to suggest emails require a high degree of formality. However, it is also essential in effective workplaces that they foster a strong working relationship between people at all levels of authority. Therefore, emails require an element of rapport building as well. 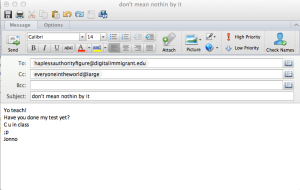 So what should a student do?

This is actually fairly simple.

Shades of grey when signing in and out

When emailing a staff member it is important to make some use of the conventions of letter writing.

Could I please book a meeting with you regarding my [situation] please.

In the above example, the student has started by addressing the receiver and finished with appreciation and their name. The staff member who submitted this example did comment on the word “please” being used twice was a little distracting but thought the student had made a commendable effort.

I was just wondering if you have a digital copy of the tasks i could have ?

Hey miss hope you enjoyed your holidays do we have [subject]tomorrow ?

Choosing not to sign in or out can be as inappropriate as writing with an overly familiar tone. Below are examples to consider rewriting.

I want to do a [task] that allows me to [details]. Although I’m not sure whatto do it on. I don’t want to do a basic or common topic like [example]. PleaseHelp 🙂

is there anything i should change. (Assignment attached)

yo sir I dropboxed my assignment because it wouldn’t print